Great success for the Social Media Week in Rome 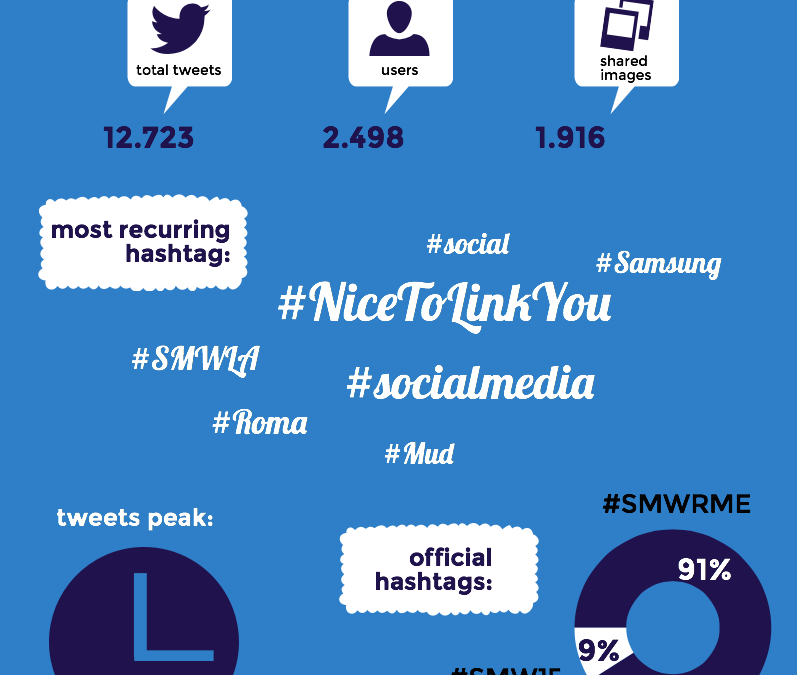 Started on Monday the 8th and ended last Friday at Casa del Cinema in Villa Borghese, the Social Media Week registered a great success and an important increase of the participants: 35% more than the last year edition; it has been realized by Milan Media Fair and Business International and managed to attract more than 6.700 enrollments to the 68 events and 203 speakers.

The Social Media Week and its official hashtag #SMWRME caught a lot of attention on social media too, and it ended up at the top of Twitter trends in Italy. #SMWRME is present in the 91% of tweets, #smw15 in the 9%, and the official account, @SMWRME, has been mentioned in more than 2.000 tweets. The talken-about had its major peak at Thursday morning, at 10.00; considering the daily timeline, most conversations concentrated in the morning, just before the lunch break.

The majority of conversations come from Italy, Usa is at the second place, also because the other social media week took place at the same time in Los Angeles.

The most frequently used hashtags show the most discussed topics during the event: #NiceToLinkYou, which is the hashtag taken from Ford to the Social Media Week as a symbol of the will to unite and engage more and more users in online conversations, #socialmedia, #SMWLA, the Social Media Week which took place in Los Angeles, #roma and #mud, which stands for Museo Digitale (Digital Museum). The hashtags analysis shows then how social media, new marketing boundaries and digital museums are the topics the mostly made users share comments using the hashtag #SMWRME.

Who are the users that twitted most? Besides the official profile, there are other relevant users such as @Blweb, Business International official account, the leader in the organization of conferences and formation for managers and companies, @LinkCampus, Link Campus University, and @SIMO2, the account of the StorytellingITA co-founder. The most mentioned profiles, which means being an interesting and popular interlocutor, are @SMWRME, @forditalia, @LinkCampus, @MI_BACT, Cultural and Tourism Ministry official account, @roma.