Four Fashion Weeks, over 500k tweet: the #nyfw has been the most social

New York, London, Milan, Paris: between September 7th and October 5th the most popular fashion brands have walked the catwalks, the spotlights being on models, celebrities and fashion designers from all over the world. Four days of intense social media conversations and tweeting activity through the official hashtags related to each city: #nyfw and #newyorkfashionweek for New York, #lwf and #londonfashionweek for London, #milanfashionweek and #mfw for Milan, #pfw, and #parisfashionweek for Paris.

Through the monitoring of these hashtags on Twitter, SocialMeter Analysis has picked up all the Fashion Weeks related conversations, identify the most mentioned brands and other trend hashtags: during the period mentioned above there have been over 500k tweets and almost 200k active users in the subject. The most social event has been the New York Fashion Week with more than 335k tweets, almost 100k users and 23k pictured shared only on Twitter. The second place goes to Milan (about 140k tweets, 50k users, 13k pictures), followed by Paris (about 80k tweets, 40k users, 7500 pictures) and London (about 9k tweets, 6k users and 2k pictures).

Different locations meant different publics and different trends on social media: in New York among the top related hashtags (which in the case of NY are also the most mentioned brand profiles) there were #TommyxGigi, the new Tommy Hilfiger collection signed by Gigi Hadid, with almost 16k mentions and fashion designers #MalanBreton (4500 mentions) and #TomFord (2855). In Milan Twitter went crazy over #Tods (2387), #Fendi (1991) and #GiorgioArmani (1806); in Paris #FentyPerPuma, the new collection signed by Rihanna for the brand, showed the best performance with 12400 mentions, followed by #Dior (2234) and #SainLaurent (1145). In London, which has been the least active Fashion Week on social media, the top used hashtag was #Burberry, whereas @versace won first place among the top mentioned brand profiles.

Particularly popular on Twitter were also the hashtags and profiles related to celebrities: singers #SandaraPark (or #Dara) and #Krystal in Milan, model @gigihadid and actress @arden_cho in New York and @rihanna (also the most mentioned profile in the #pfw tweets) in Paris. 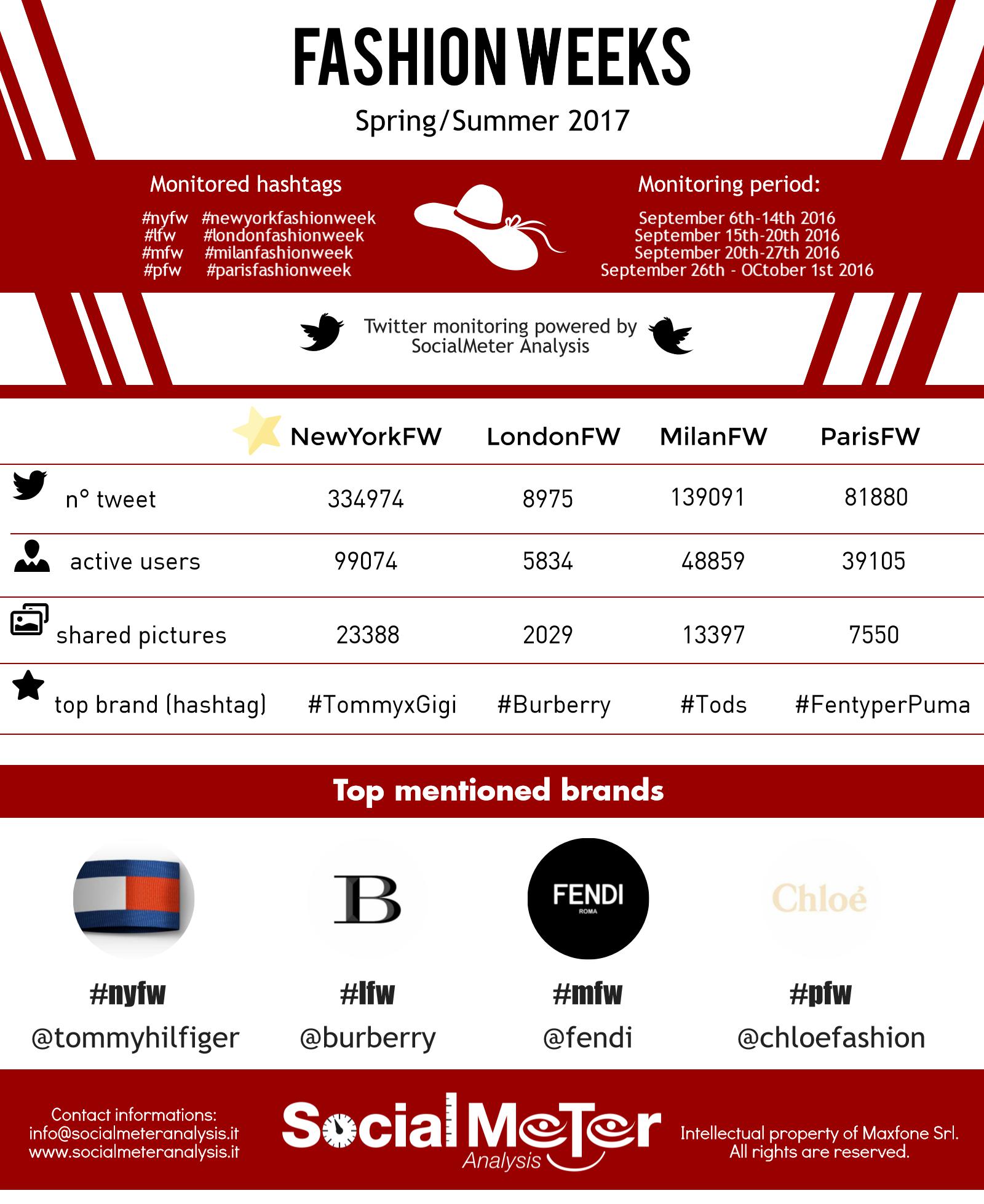